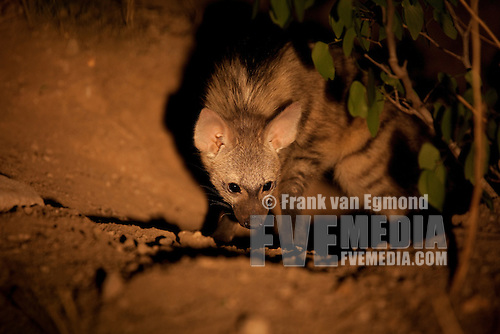 The aardwolf (Proteles cristata) is mostly nocturnal and is a very specialized mammal, feeding almost exclusively on termites and insect larvae. It is shy, rarely seen and not often photographed. With over 50 years of combined experience, the field guides that joined the photo shoot had never seen aardwolf pups before. New pictures of these creatures have been added.

It is springtime in Botswana and the leaves are just starting to sprout. At the edge of a small clearing, amongst the Mopani trees is the newly found aardwolf den. Being about two months old, the pups are still too young to join their parents on their nightly foraging trip.

I stake out at the remote side of the clearing together with the guides, keeping a good distance from the den. We finish a bowl of popcorn1, as we watch the last rays of sunlight disappear. Fireflies are dancing around the young mopani trees and Guineafowl alert calls can be heard in the distance.

Just before total darkness sets in, an adult aardwolf jumps out of the den. We catch a glimpse of it, as it covers 50 odd meters within seconds and disappears inbetween the dense trees, leaving me without pictures.

After dark, while waiting, we occasionally check for activity using a spotlight. The two pups are curious and are interested in the insects that the spotlight attracts. The mopani trees are dense and mostly in the way. One pup is exploring the direct vinicity of the den, allowing me to take a few pictures.

1.  Popcorn. Usually available at the cinemas. Also available on game drive vehicles at a certain lodge in Botswana.